Hotel Glavović is Lopud's oldest hotel, which is newly remodeled.

We invite you and your family to stay at our beautiful and romantic acommodation in Lopud island when you embark on your and visit Croatia! Our Hotel Glavović has certainly come a long way since 1927 when it opened its doors to serve the Croatian locals and tourists who regularly visited the island. We have added more modern amenities after remodeling the interiors including satellite TV's, internet connection, en suite phones and standard air conditioning for all the rooms.

Lopud is situated only seven nautical miles northwest of Dubrovnik.

Dubrovnik "the pearl of the Adriatic", is known as one of the mayor tourist destination. Lopud is among one of the prestigious Elaphiti islands, rich in Mediterranean vegetation, surrounded with the crystal clear Adriatic Sea.

The hotel is situated in the center of the island among a stunning promenade. It is conveniently located next to a sandy beach, post and tourist office, church, local museum, several different restaurants and café bars.

We offer 11 rooms and one apartment, each with an extraordinary panoramic view of the sea and surrounding islands.

The Glavović history started in 1903. with the opening of the first restaurant on the island, and in 1927. with the first hotel, which was recently remodeled in 2004. 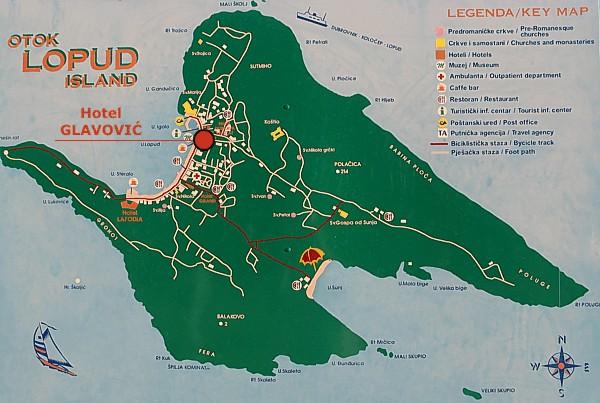 As in the 100 year tradition we would like to extend our services to ensure an unforgettable stay on the island of Lopud.

The beauty and harmony of Lopud is simply breathtaking. To give you a taste, we've put together a series of virtual tours that attempt to convey something of the magic of Hotel Glavović and Lopud Island. Just click to start the tour.